Archive information from our research and pre-consultation which was undertaken between 12 March to 9 April 2018:

Following many years of discussion, you will be aware that the new Gloucestershire College campus is being built in Cinderford. Dene Magna School has been involved in this project since its inception and has always sought to support the development of Post 16 provision in the Forest of Dean.

As you will see form the press links below, there has been transparency in this project and our involvement.
The original aim was to provide support for the A-Level provision from staff across the central forest Secondary Schools. This model evolved over time to Dene Magna School being the sole support school in this development, but the hope was always there to involve the other schools in the Forest.  Evidence from the headteachers at the secondary schools suggested that there was a need for high quality provision in the central Forest area and that this could play a major factor in raising aspirations for students across the area. Currently, many students leave the Forest of Dean for other providers and there is no centralised A-Level provision in the area.
As the new college project was signed off, there had been no objection to the education provision plan put forward by Gloucestershire College. As time moved on, Gloucestershire College took the decision to cease A-Level teaching across its campuses. This obviously had a knock on effect for the project and Dene Magna (as can be seen by the article) expressed a very public interest in helping to fill this gap.
It was felt that to not have any A-Level provision in the central forest would be to the detriment of aspirations for continued growth and forest wide regeneration.
It has been no secret that Dene Magna School has always expressed a desire to host A-Level teaching and feedback from students and parents/carers on results day has only served to bolster this desire as we are constantly asked when we are getting a sixth form. As an Outstanding School, we firmly believe that the high quality teaching and learning provided here will transition very well into the next phase of KS5 teaching.
Plans have been drawn up over the past three years, timetables created, staffing models selected and all of this has been done in conjunction with Gloucestershire College and the Regional Schools Commissioner (RSC). This has by no means been a quick decision.
Following lengthy discussions with Gloucestershire College and the RSC office (following published DfE guidance), we have started a consultation process with a view to ensuring that the already planned provision in the new college can actually take place. Our involvement has changed in that now the students would be Dene Magna students and we would be using the new provision.
This is obviously not a straightforward desire to expand the school. This is based on us fulfilling our part in ensuring the new college building has the very best provision.
You will no doubt agree that this is a very exciting time for the central Forest. At a time where aspirations need raising across the area, this flagship provision will be a vital cog in the regeneration project for the Forest.
This consultation will inform our decision to apply for a significant change to an Academy so that we can teach A-Level subjects to students in the Forest of Dean. The start date for this will hopefully be September 2019.
Update 26/4/18
This consultation ran between 12 March to 9 April 2018 and followed Gloucestershire County Council guidance. Local schools and education providers, shops, local businesses, services as well as the press were all contacted and asked for their comments. Following the end of this consultation an outline of responses was communicated to the public (a copy of the letter can be seen below).
https://www.gloucestershirelive.co.uk/news/gloucester-news/headteacher-outstanding-school-wants-build-45556
http://www.theforestreview.co.uk/article.cfm?id=106713&headline=College%20end%20to%20A-Level?&sectionIs=news&searchyear=2017
http://www.bbc.co.uk/news/uk-england-gloucestershire-24122816
https://www.gloucestershirelive.co.uk/news/gloucester-news/take-virtual-tour-inside-new-785302
https://www.gloucestershirelive.co.uk/news/gloucester-news/new-forest-dean-campus-gloucestershire-943967
http://www.gloscol.ac.uk/news-and-events/news/2016/05/new-forest-of-dean-college-campus-set-to-welcome-students-in-2018/
http:.//www.gloscol.ac.uk/news-and-events/news/2017/05/building-starts-on-new-forest-of-dean-campus/
http://www.gloscol.ac.uk/news-and-events/news/2017/05/northern-quarter-building-to-start-this-month/
http://www.gloscol.ac.uk/news-and-events/news/2017/02/northern-quarter-college-funding-gets-the-green-light/
http://www.gloscol.ac.uk/news-and-events/news/2018/01/gc-will-play-an-important-part-in-developing-future-skills-says-pm/
http://www.gloscol.ac.uk/news-and-events/news/2017/11/fly-through-the-new-forest-campus/
Task group report:
http://glostext.gloucestershire.gov.uk/documents/s36029/Educational%20Attainment%20FoD%20Report.pdf
Responses so far can be seen below:
A recent survey conducted with all members of Year 10 revealed an overwhelmingly positive response.  Of the 155 replies that were collated, 122 pupils stated they would consider choosing Dene Magna as their first-choice A-Level provider.  Among their reasons for wanting to remain at Dene Magna were, "excellent teaching staff", "wouldn't want to go to any other school" and "I don't want to travel too far to study."
Names have been removed in compliance to data protection 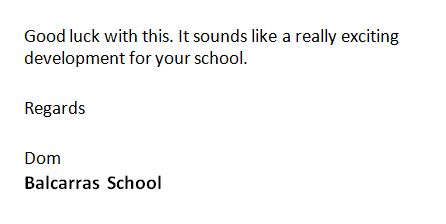 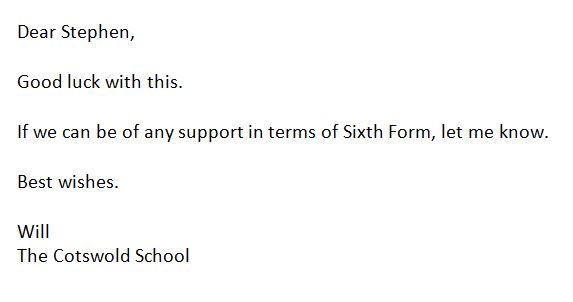 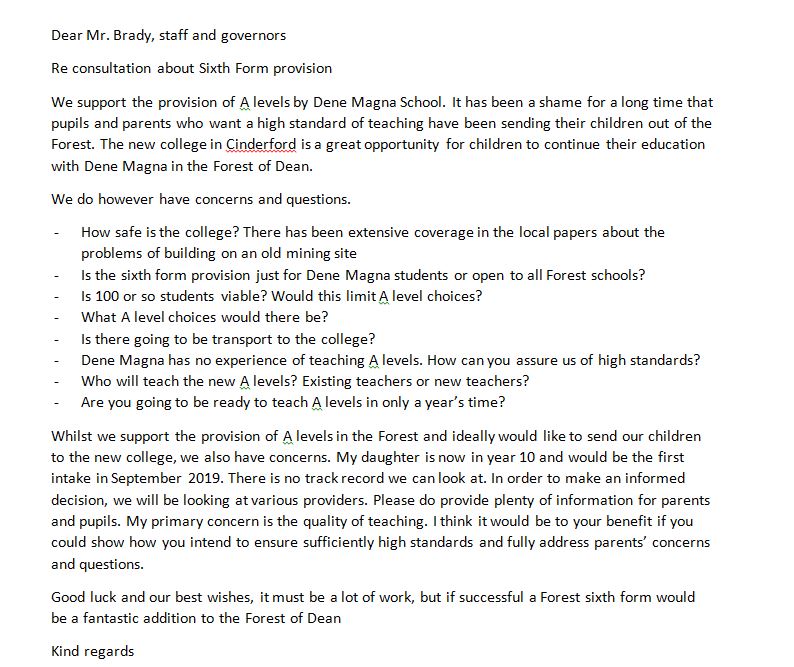 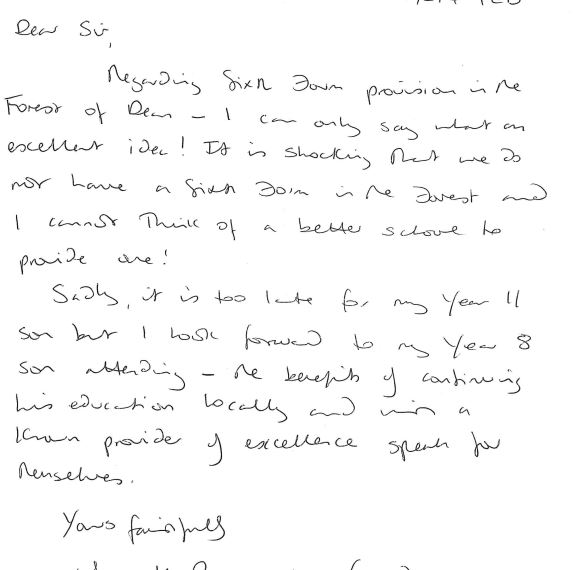 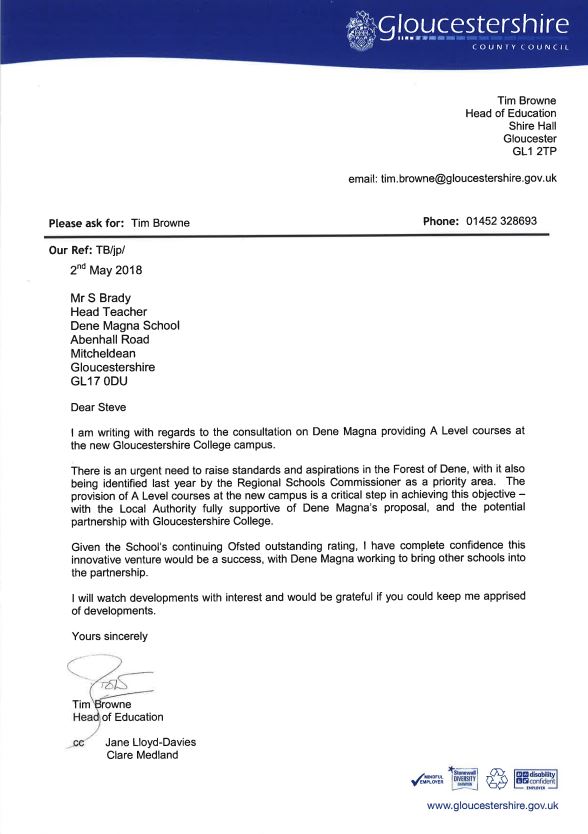 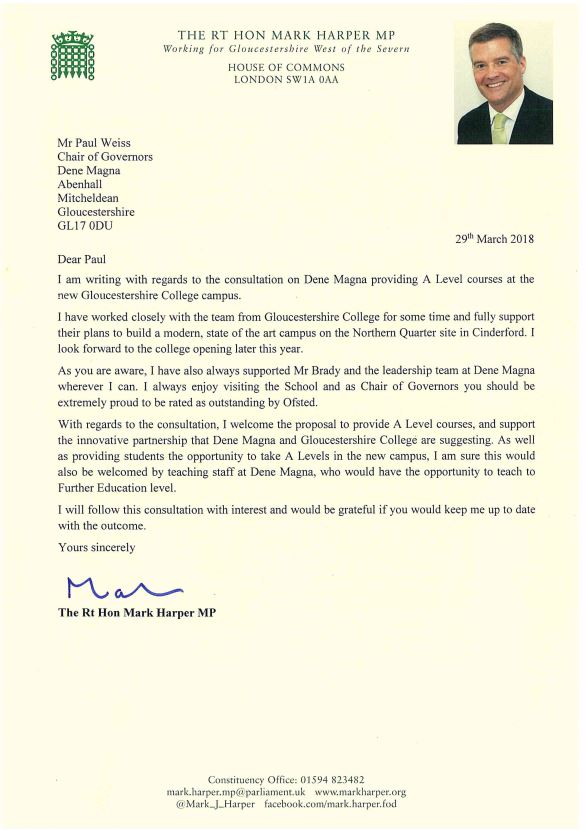 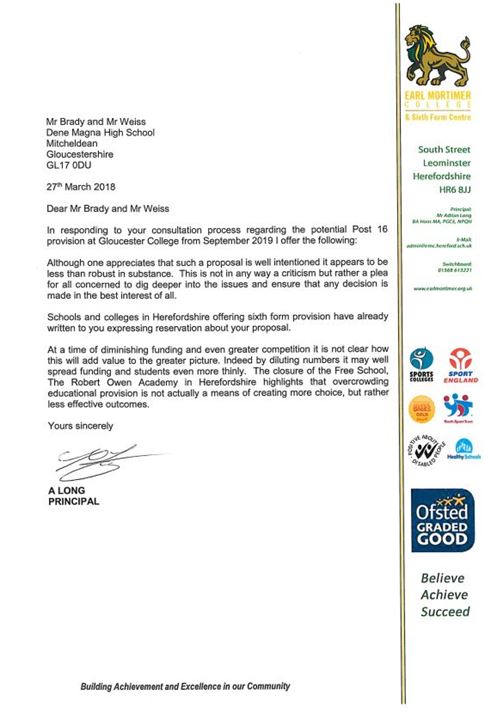